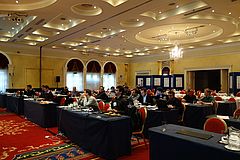 Over 30 RG member representatives from industry and academia as well as additional interested ICPE participants attended this year's RG face-to-face meeting in Dublin, Ireland right after the conference's main program. For the fourth time, the RG's annual meeting was co-located with the ICPE conference. The meeting started with an introductory talk by the RG chair, Sam Kounev, who welcomed the attendees, gave an overview about the RG scope and activities, and briefly reviewed the achievements of the last year. The chairs of the Cloud and IDS Benchmarking working groups, Alex Iosup and Marco Vieira, introduced and reviewed their groups' activities. Moreover, Meikel Poess presented the current status on the new working group on big data to be announced soon. Eight technical talks by RG members completed the meeting and provided the basis for further vivid discussions:

In addition to the RG's annual meeting, both working groups held separate meetings on the next day with additional talks and discussions.

Moreover, the SPEC Distinguished Dissertation Award was presented during the conference. The ICPE '15 conference, which will be held in Austin, Texas, USA from January 31 to February 4, 2015.